Linux Gizmos has an excellent and long inventory of single board computers that are friendly to hackers. Their tally of 98 systems gives a brief technical overview of each, plus a take on how easily the system can be booted and programmed with open source tools. Prices range from $15 to $200, and most of the boards under review (though not all) are ARM based.

The story of ARM-based single board computers all too often comes down to how hard it is to boot the systems and how much of a challenge it is to get a mainline kernel running. This inventory should be seen both as a snapshot of the state of the art as well as a shoppers guide to technology that might be applicable to your embedded Linux or development board selections. A convenient comparison spreadsheet published through Google Docs gives a quick summary of processor details, GPU and memory configurations, I/O ports, and storage so that you can zoom in quickly on the part you need.

Automotive Grade Linux (AGL) is a Linux-based in-vehicle infotainment (IVI) platform aimed at OEMs who are looking for an open software stack for the connected car. AGL is a complete software stack including a Yocto-based board support package, automotive specific middleware for audio management, connection management, graphics, and a full application framework with App APIs and SDK. AGL also includes extensions to support the automotive CAN and MOST bus and a full security framework to make it reliable enough to put in vehicles.

At the May 2017 Automotive Linux Summit event held in Tokyo, Toyota announced that Automotive Grade Linux would be the basis for the vehicle infotainment system system in the 2018 Toyota Camry as well as Lexus vehicles in the future.

This IVI platform was designed from the start to work on ARM and Intel platforms equally well. In addition to the reference platforms from Renesas, Intel, Qualcomm, NXP, TI, the system can run under emulation with QEMU or on community supported platforms including the widely available Raspberry Pi.

AGL is an open source project hosted by The Linux Foundation. Dan Cauchy is Executive Director of Automotive Grade Linux. The AGL platform is available to all, and anyone can participate in its development.

A video by Walt Miner, “Linux You Can Drive My Car”, was presented at the Embedded Linux Conference in February 2017. 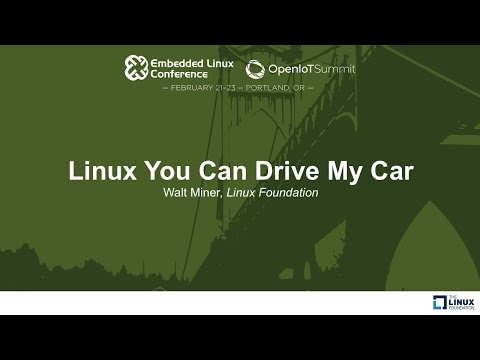 Cavium, maker of the high performance ThunderX and new ThunderX2 server-class ARM systems, will be presenting at the ISC High Performance conference in Frankfurt, Germany June 18-22 2017.

The Going ARM workshop on the morning of Thursday 22 June 2017 features talks on ARM tools from Allinea, reports from the Barcelona and Isambard supercomputer centers, a University of Michigan presentation from Jonathan Beaumont on ARM’s SVE vector processor, and Giri Chukkapalli of Cavium speaking on the Cavium ThunderX2.

Microsoft and Qualcomm have announced plans for an ARM based Windows 10 device to be powered by the Snapdragon 835. The system was demonstrated running Windows applications in an emulation mode, and the report from Tom’s Hardware of that demo talks of multiple Office documents, video, and email running with no visible delays or hiccups.

Demos of the system have been out long out for the tech press to start to speculate about how this system will fit into the Windows ecosystem. Tom’s Hardware has a long and thoughtful but speculative piece based on reporting of the demos, calling out the features of this new system and comparing it in intended function to Google’s Chromebook design.

Minio on Go speedups from FOSDEM

Minio is a distributed storage system that provides a familiar Amazon S3 based programming interface but that runs on your own systems. The folks at Minio have spent considerable effort working on performance by embedding Intel and ARM assembly language routines to take advantage of vector and matrix operations on both platforms.

Frank Wessels from Minio presented a talk on High performance scaling techniques in Golang using Go Assembly, at the FOSDEM 17 conference in Brussels in February 2017. From the talk preview:

Regarding hashing we have developed Go packages for two hashing algorithms (BLAKE2 and SHA256) that take advantage of the Golang (or Plan9) assembly capabilities. These packages exploit SIMD instructions of Intel and the Cryptography Extensions for the ARM platform. The speed up range from 3 to 4 times (Intel) to 100X (on ARM). Due to the use of Golang assembly there is no need for a C-compiler in order to use these packages (when compiling from scratch). 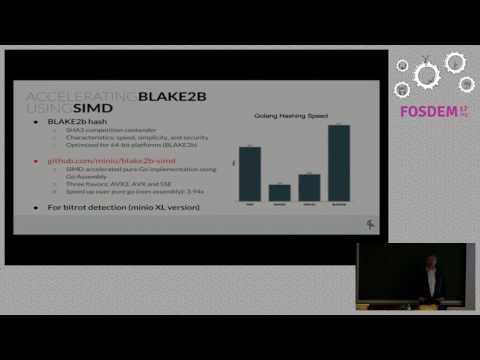 Wireguard is virtual private network software with a novel design that puts most of the work into the Linux kernel. It makes use of familiar Unix networking primitives to control routing and filtering of packets, allowing the system manager to compose a VPN out of components that can each independently be audited for correctness.

The most recent development snapshot of Wireguard, 0.0.20170531, includes a set of ARM assembly instructions that speed up cryptographic operations on ARM NEON capable processors.

Written with vim on a MacBook Air, with coffee from Morgan and York in Ann Arbor.

Works on Arm News is released weekly on Fridays. Follow @worksonarm on Twitter for the weekly link, or follow the worksonarm-news project on Github for notifications. Email to [email protected] if you’d like a direct email.

Back and current issues are available from the Works on Arm News archive on Github.

In the news MiniNodes 5-Node Pi 3 CoM Carrier Board,…

Build it and They Will Run

Build systems are the keystone of modern software development. Increasingly,…